Matemwe Retreat offers 4 secluded villas with a stunning view of the Indian Ocean. Is one of the most exclusive accommodation choices of Zanzibar.

The Matemwe Retreat offers 4 elegant and secluded villas which are set high in the palm trees with a stunning view of the Indian Ocean. The private butler services makes sure that you are experiencing one of the most exclusive accommodation choices of Zanzibar. Plunge in your private pool and relish the spacious roof terrace with day bed and loungers.

The Matemwe Retreat is the perfect tropical escape for a romantic get-away offering you the highest degree of exclusivity and privacy.

Your rate includes full board dining, drinks, a snorkeling trip, a guided reef walk and a guided village walk. If you wish to you use any of the facilities of the Matemwe Lodge situated south of the same premises you are more than welcome to enjoy among others the ocean-view open-air restaurant.

Children are not allowed at Matemwe Retreat.

Matemwe is a small and traditional fishermen village 75min from the airport on the northeastern coast of Zanzibar.

The rates don’t include:

Are you travelling with children?

Matemwe Retreat offers a secluded and private atmosphere, thus children are not allowed in this accommodation.

We kindly invite you to see our many other options which do accept children.

The policy of this hotel in case of cancellation or no show is:

● Refunds are not possible in case of late arrival or no show.

Additionally, zanzibar.eco as a platform provider charges 30 EUR processing fee for each cancellation.

The Matemwe Retreat uses solar water heating and reuses grey water for their garden. Plastic bottles are avoided whenever possible therefore guests are offered water jugs and flasks for drinking water which they can refill. Waste is separated and recycled and a private waste management company paid by Matemwe Retreat cleans the village and the beach on a daily basis.

Matemwe Retreat has a long-lasting tradition of being an integral part of the community of Matemwe as they work in close collaboration with the villagers and the school’s headmaster. They provide filtered water to the village, donate on a yearly basis school necessities such as uniforms and desks and built a community centre as well as a 7-bedroom house for doctors and teachers.

The staff’s majority consists of villagers from Matemwe to whom there is always given preference. The Retreat offers to their staff a renowned three-year online training program in hospitality which concludes with a certificate. 5 Dollars per night and person is used to fund the Asilia Giving foundation which supports numerous conservation and education programs throughout Africa.

Matemwe Retreat itself plays an active role in the conservation of sea turtles as they relocate the nests to their beach and have them protected until they can hatch safely. For turtles who are too weak and small they work together with a turtle sanctuary to monitor them until they can be released. The Retreat does not buy any net or spearcaught fish but only that caught on lines and they organize environmental education programs in the school.

Matemwe Retreat lies opposite the Mnemba Atoll – a world-famous reef for snorkeling and diving with high chances of spotting dolphins and turtles. Other activities which are offered are kite-surfing, guided reef walks, kayaking on the reef, traditional sailing and fishing excursions, dhow sailing trips, sand-bank excursions and many trips on the rest of the island. 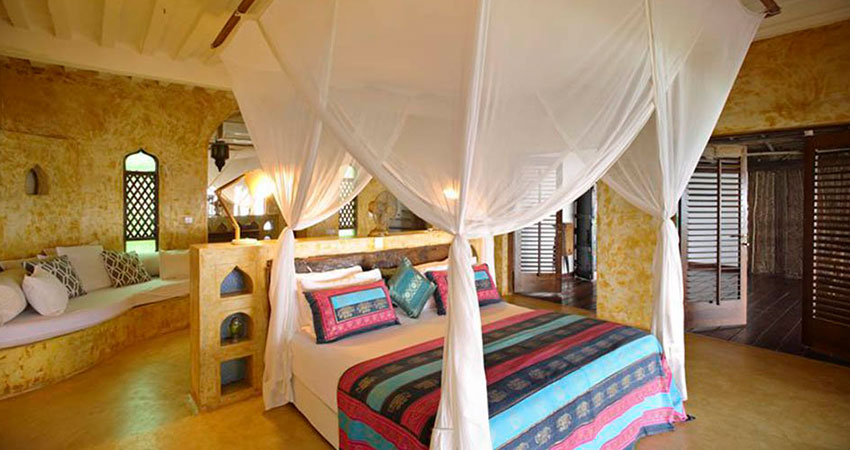 The bedroom is air conditioned and leads into a bathroom with shower and a bath overlooking the Indian Ocean. The large verandas offer a cocktail bar and plenty of space for private dining. 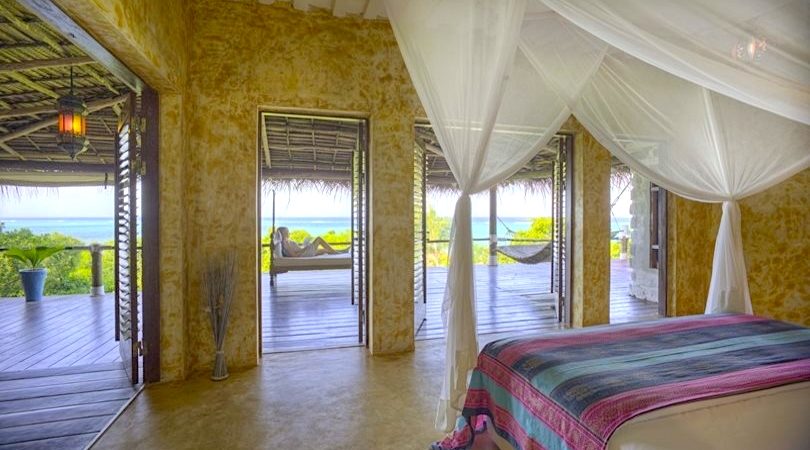 The bedroom is air conditioned and leads into a bathroom with shower and a bath overlooking the Indian Ocean. The large verandas offer a cocktail bar and plenty of space for private dining

What is eco rating?